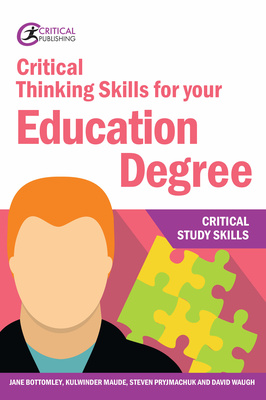 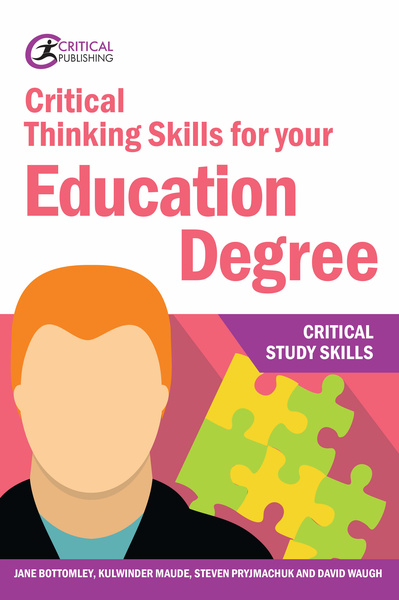 Recommend this title Review this book

This title is available for inspection, please request. More details

Critical Thinking Skills for your Education Degree provides you with a sound knowledge and understanding of:

If you are embarking on a university education or teaching degree, the books in this series will help you acquire and develop the knowledge, skills and strategies you need to achieve your goals. They provide support in all areas important for university study, including institutional and disciplinary policy and practice, self-management, and research and communication. Tasks and activities are designed to foster aspects of learning which are valued in higher education, including learner autonomy and critical thinking, and to guide you towards reflective practice in your study and work life.

Kulwinder Maude is a senior lecturer in education at Kingston University. Her background is in primary teaching and she worked as an EAL coordinator and later as an inclusion manager in primary settings in London. As a part of her master's degree, she explored emergent bilingual reading in KS1 children, and her research is focused on student teachers' knowledge of early reading development.

David Waugh is a former deputy headteacher who has worked in Initial Teacher Training (ITT) from 1990 at the University of Hull, where he led the PGCE course and became Head of Department.  In 2008 he was appointed as a National Strategies Regional Adviser for ITT.  He is currently Director of the Primary PGCE at Durham University, where he is also subject leader for English. He has published extensively in primary English, as well as developing e-learning resources for National Strategies for English, mathematics and mentoring and coaching.

Jane Bottomley is a freelance writer, teacher and educational consultant. She is a Senior Fellow of the Higher Education Academy and a Senior Fellow of the British Association of Lecturers in English for Academic Purposes. She has helped students from a wide range of disciplines to improve their academic skills and achieve their study goals, including 14 years as a Senior Language Tutor at the University of Manchester. Jane is the editor of the Critical Study Skills series, which covers nursing, education and social work.

Steven Pryjmachuk is Professor of Mental Health Nursing Education in the School of Health Science's Division of Nursing, Midwifery and Social Work at the University of Manchester and a Senior Fellow of the Higher Education Academy. His teaching, clinical and research work has centred largely on supporting and facilitating individuals – be they students, patients or colleagues – to develop, learn or care independently.

Your Reviews on this book